Demeritt Hill Farm grows a wide variety of apples. The apples we carry range from the standard classics and antiques to the latest varieties. The descriptions below provide information on the kinds we grow and also gives a brief description.

You can also use our quick guide to navigate for your needs. If you do not see the apple you are looking for, please ask us if we have it. We hope that you find the following information interesting and useful toward choosing the right type of apple for your needs.

Pick Your Own customers must purchase a One Peck bag prior to entering the orchard to pick apples.

Apples can also be purchased in the farm store in both Half Peck and One Peck bags. 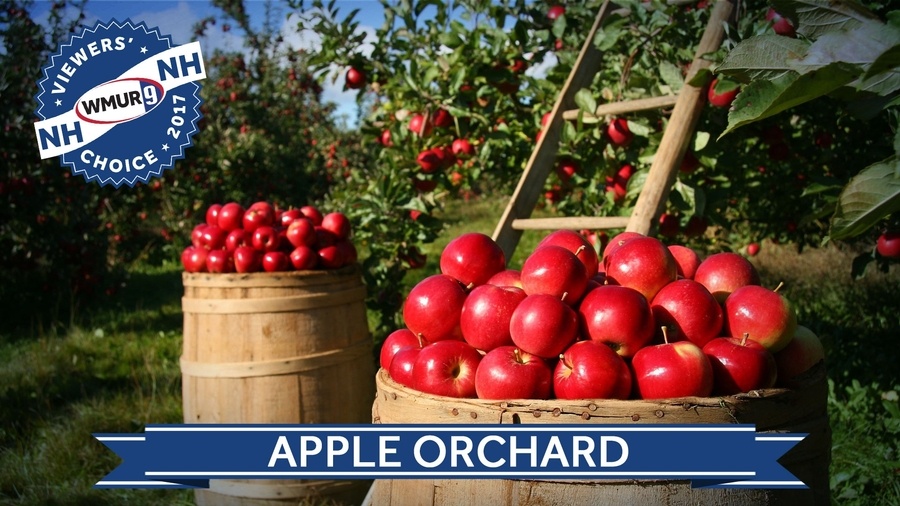 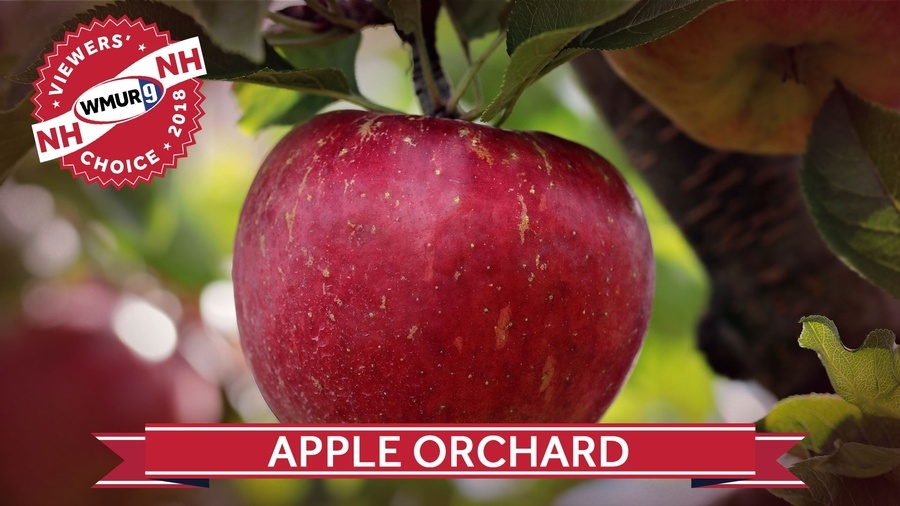 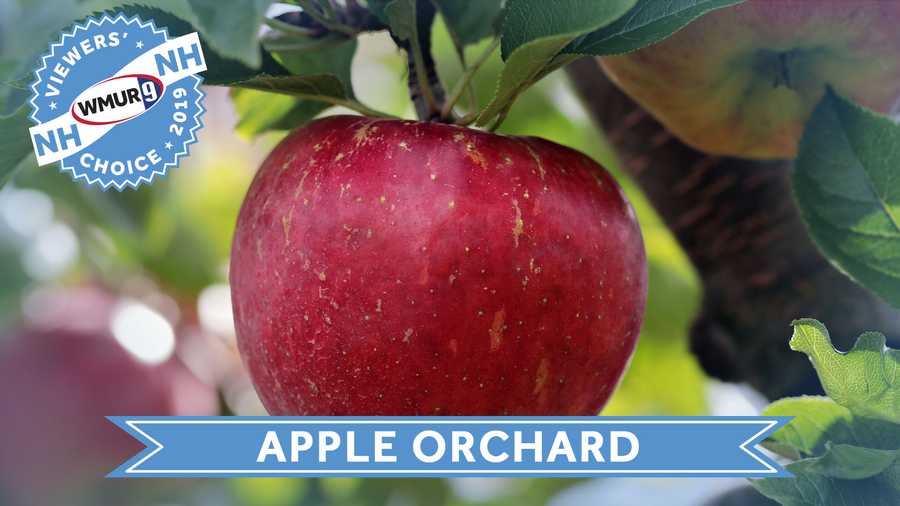 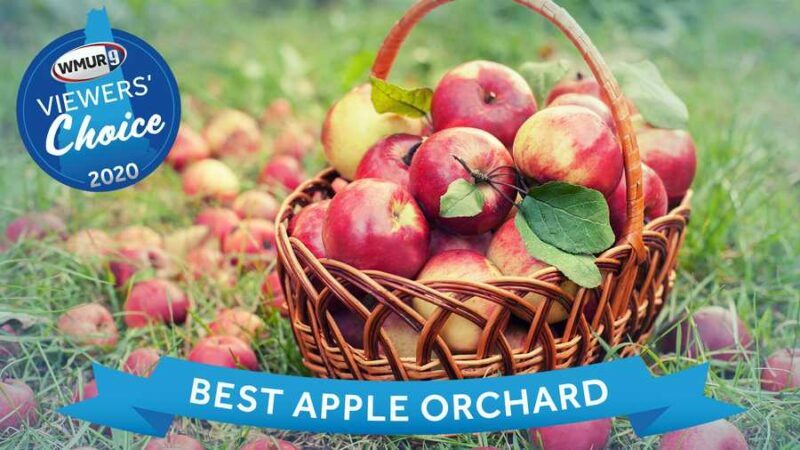 Learn more about the apples we grow 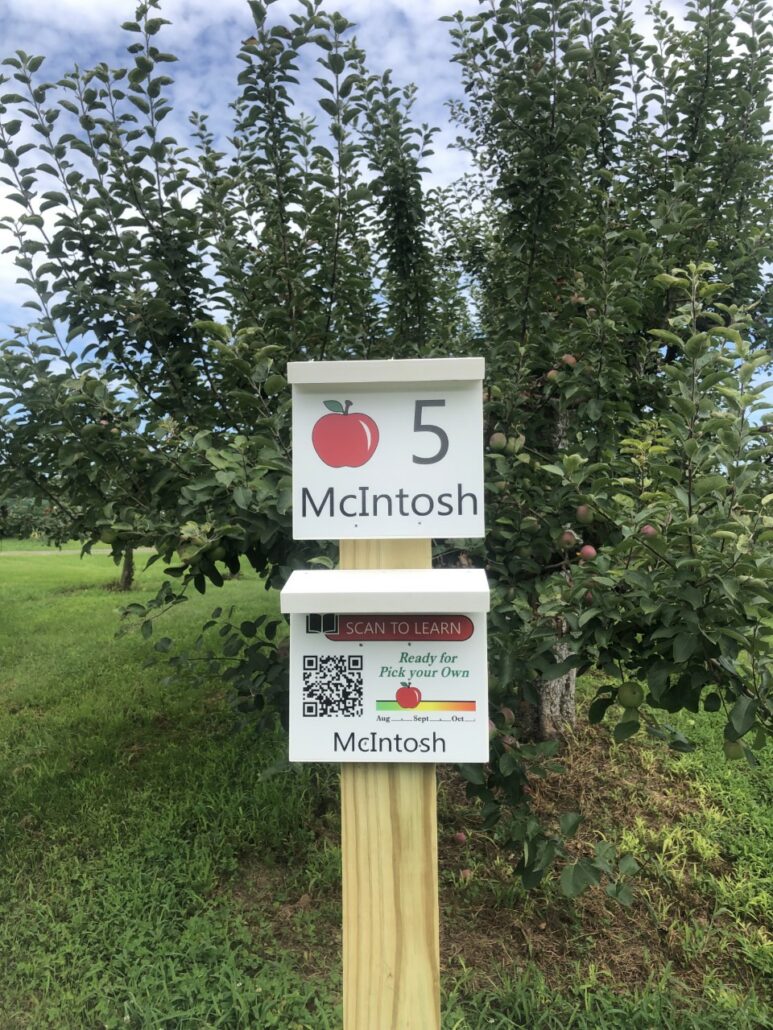 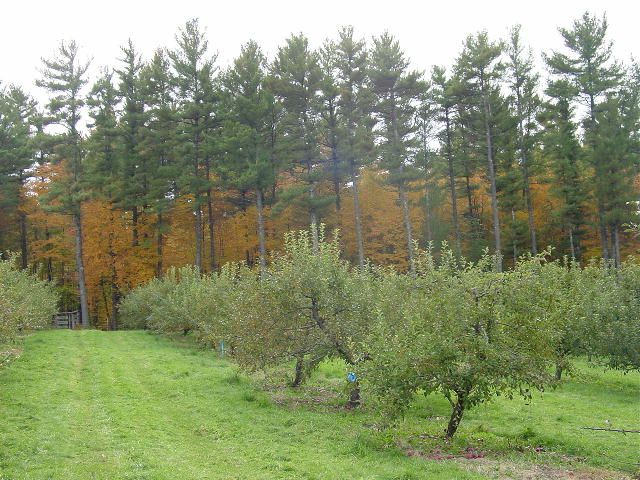 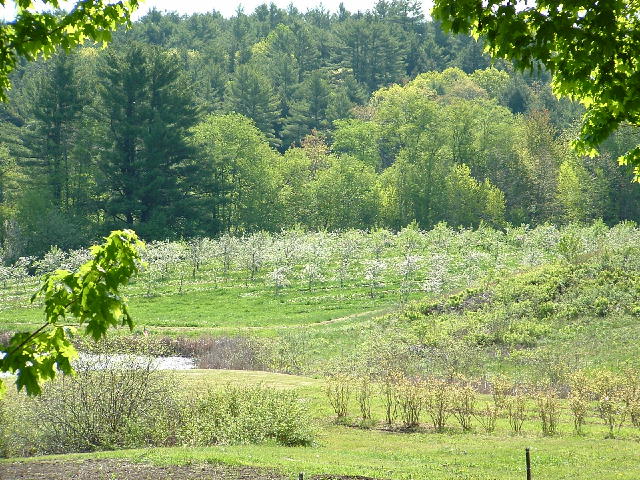 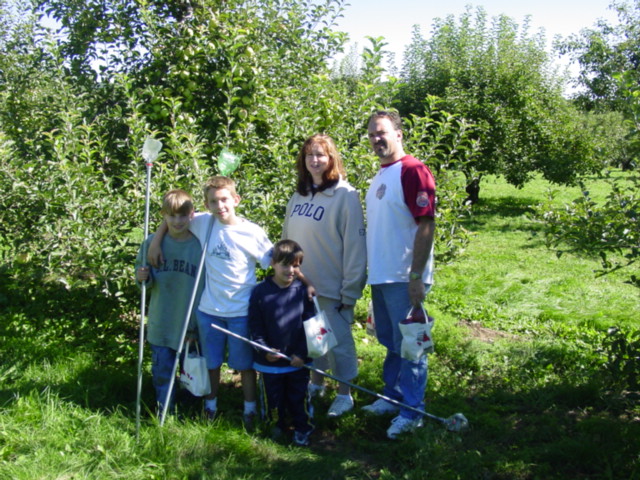 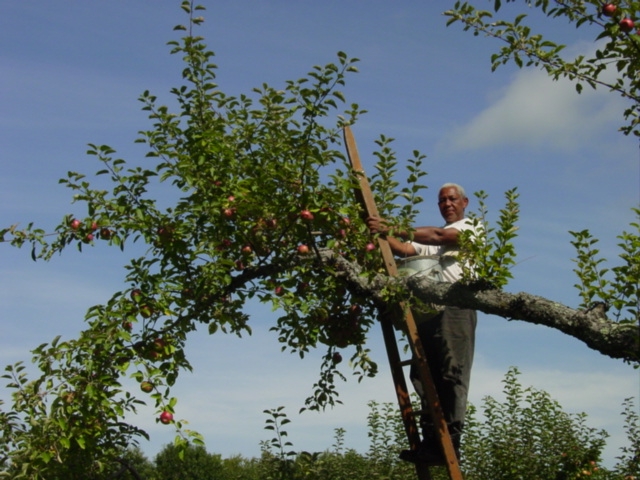 Types of Apples We Grow

Here’s a list of all the great apples we grow. To learn more about them, click the button below.

Learn More About Our Apples

The Ambrosia apple is crisp and juicy with a sweet, honeyed flavor. It is low in acid and slow to brown after being cut open. It keeps incredibly fresh in a cooler for months and is perfect for kids as it can be sliced for snacks and won’t brown quickly. Harvest for this apple begins in late September.
* Spring 2021 planting

Autumn Gala has a similar taste as the Gala but the flesh is firmer and denser than a standard Gala. It ripens about 5 weeks after a standard Gala and has the same blushed red-orange over yellow coloration. It stores exceptionally well and is harvested in early October.
* Spring 2021 planting

The Cortland apple was introduced at the New York State Agricultural Experiment Station back in 1898. The apple is larger than the McIntosh and ripens about two weeks later as well. This juicy apple is ideal as a dessert apple and is also a very good eating apple. The harvest for this apple begins in September and lasts through early October.

This apple is a small to medium sized apple that has a deep red color. The flesh is notably crisp and yellow. It is very sweet with a sub acidic flavor.
This a great apple for both snacking and baking. This apple is harvested in mid to late September.
* Spring 2021 planting

This is a summer apple blend of Paula Red and Summer Mac. Dandee Red is a red blush apple with a crisp, creamy white flesh that is tart. It can be stored for up to 3 months. It is great for eating, sauce, pies and baking. This is a great replacement for the Paula Red. This apple is harvested in Mid August.
* Spring 2021 planting

This apple retains all of the characteristics of the standard Honey Crisp with the addition of improved coloration. These apples keep but must be refrigerated. They are harvested in early to mid September.
* Spring 2021 planting

The Gala apple was introduced in the 1960’s to the United States from New Zealand. This apple is a cross between a Golden Delicious and an Orange Red. Gala is an excellent tasting apple and can be also used as a cooking and baking apple. The taste is sweet and provides a great aroma. The harvest for this apple begins in September.

The Ginger Gold was found as a chance seedling growing among twisted uprooted trees in the foothills of the Blue Ridge Mountains in Virginia. It is descended from the Golden Delicious and Albermarle Pippin. This is the best of the early golden apples. It is sweet, tangy and juicy; consistently scoring very high in taste tests. Harvest begins in mid September.

Granny Smith apples have been cultivated for at least 140 years. Its origin traces to a mess of French crabapples that were tossed out in Grandmother Marie Ana Smith’s Australian garden. She nurtured the serendipitous sprouts from those crabapple seeds and the rest is horticultural history. This sour apple is harvested in early November.

The Hampshire Mac was discovered as a chance seedling in 1990 among a row of McIntosh trees in New Hampshire. Hampshire Mac is a firm, crisp and juicy Mac like apple. This nearly solid red apple has a thin, sturdy skin and bears a mild sweet, sub-acid flavor that becomes more aromatic as it ripens. This cream-colored flesh is firm and crisp making it an excellent fresh-eating and cooking apple.
Harvest begins in late September and ends in mid-October.

Honey Crisp was produced from a 1960 cross of Macoun and Honeygold, as part of the University of Minnesota apple breeding program to develop winter hardy cultivars with high fruit quality. Honey Crisp fruit is characterized by an exceptionally crisp and juicy texture. This apple comes into harvest in early October.

The Ida Red was developed by the Idaho Agricultural Experiment Station in 1942. This is a cross between the Jonathon and Wagener. The apple has a crispy-crunchy flesh and is rich in flavor. It is excellent for pies, sauces, eating and baking. Ida Red ripens in mid to late October.

This apple was released by New York State’s Geneva Station in 1968. The apple is a cross between the Jonathan and Golden Delicious. It is an excellent dessert or eating apple, offering a sweet-tart rich flavor. It is also a good cooking apple. Harvesting the Jonagold is in October.

The Jonamac apple is a cross between the Jonathan and McIntosh. It was developed in 1972 by the New York State Agricultural Experiment Station. The flesh is firm, crisp, and is characterized by slight tartness. Harvest begins in late September.

Farmer Phillip Rick first discovered Jonathan as a chance seedling in Woodstock, New York in 1800. The apple was originally known as the Rick apple, but later named Jonathan after Jonathan Hasbrouk who first focused horticultural attention to it in 1826. This apple is harvested in early October.

This apple was developed by the New York State Agricultural Experiment Station in 1923 and was named after a Canadian plant researcher. The apple has white flesh and is juicy. It makes an excellent all around apple. Harvest ranges from late September into October.

The McIntosh was developed by John McIntosh in 1870 in Ontario, Canada. It is a cross between Fameuse and Detroit Red. These apples have white, crisp flesh that’s full of juice. The apple is used for great eating, pies, cider and sauces. Harvest for this apple begins in September.

A cross between Golden Delicious and Indo, the Japanese seedling was developed in the 1930’s and brought to the United States in the 1940’s. The Mutsu is much larger in size than the Golden Delicious and when ripe, holds the same golden color. The apple is always crisp, juicy and very sweet. It makes an excellent eating and baking apple while holding up very well in storage. Harvest time for this apple begins in October.

The Pink Lady was discovered in Australia. It has a vibrant pink skin. The flesh color is white to cream with a sweet, sharp flavor. It is medium sized.
It is a great apple to eat and can be stored for up to 3 months. This is harvested in late October.
* Spring 2021 planting

Originated as a chance seedling, Red Delicious was one of it’s parents. This is an excellent eating apple that does not taste anything like a Red Delicious. These are large, mild apples that are crisp and sweet. It is excellent for fresh eating, salads, pies, sauces and baking. The harvest time for this apple begins in October.
* Spring 2021 planting

The apple can be identified as a tall, dark red apple that has a striking appearance. The Red Delicious has a thick skin but is very juicy and somewhat tart. These apples are primarily used for eating. The harvest for Red Delicious is in October.

Originated in Japan in the 1930’s, this apple is known for intense sweetness with a light, crisp flesh. This is a great apple for eating and salads. It is slow to turn brown. It has yellow skin and is a large apple. It can be stored in a cooler. This dessert apple ripens in October.
* Spring 2021 planting

Raised in 1926 by R.C. Palmer in Summerland, British Columbia. The apple was introduced in 1959 as a cross between McIntosh and Golden Delicious. Spencer is crimson flushed, honeyed, crisp and juicy. Tall, round to conical in shape, it is medium to large in size. The tree is spreading and fairly vigorous and is slow to begin bearing, but then bears full crops annually. This dessert apple ripens in October.

It was discovered in Washington state from a limb mutation of Imperial Gala. This medium sized conical to round fruit is considered a dessert apple. It is a strong red color with a strong stripe. It is harvested in early September.
* Spring 2021 planting

This outstanding apple originated in University of Minnesota, in 1999. Zestar!™ ripens in mid to late August. Zestar! is a medium sized, sweet-tart balanced apple with a hint of brown sugar flavor. Light, crispy and juicy. Great for eating out of hand. The harvest time for this apple begins in mid August and lasts into September.

DeMeritt Hill Farm is a proud member of the New Hampshire Fruit Growers Association and the New England Apple Association. 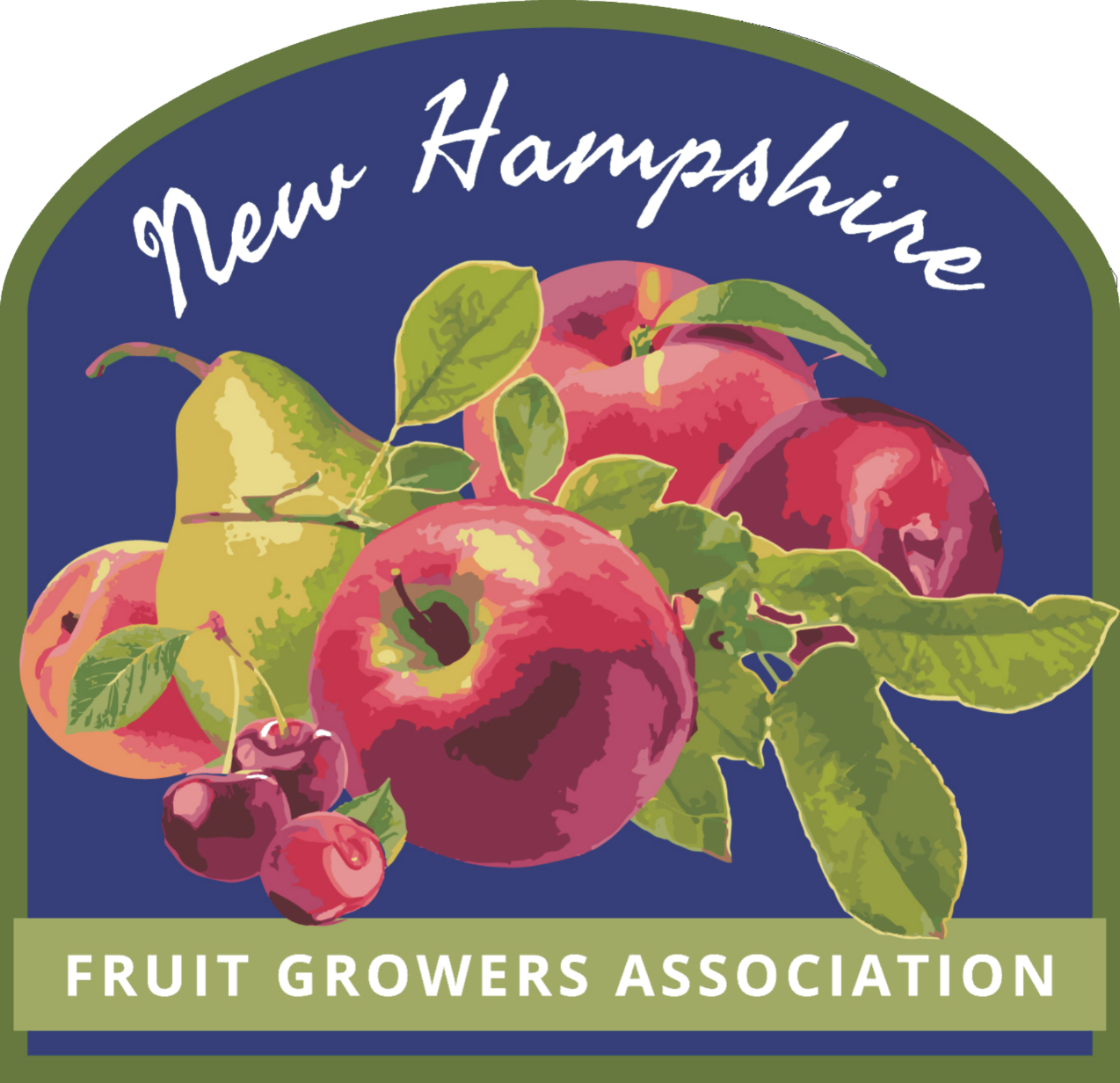